The village is composed of several settlements spread on both banks of the Studená Vltava river. The character of the village has been unfortunately considerably affected by the construction of 1960's

206 – source: Stožec Municipal Economic Department – to be specified after publishing of the results of 2011 population census

Information Centre and Centre of Environmental Eduction of the Administration of the Šumava National Park and Stožec Protected Landscape Area (IS and SEV Stožec):
tel: 388 335 014, e-mail: isstozec@npsumava.cz

Stožec was founded as a settlement of wood-cutters. We do not know the precise year of its foundation, but the first written reference about the village comes from 1769.

From the village history it is worth mentioning the greatest battle of poachers in Europe, which took place in February 1850, when the Bavarian poachers attacked the loggers who only managed to fortify themselves against the attack in the local hotel Pstruh. The fight resulted in several victims and many injured on both sides. There were still many bullets found in the beams of the timbered building during its reconstruction in 1930's.

In the beginning of the 20th century Stožec went through its greatest boom. A railway was conducted to the village in 1910. In the same period, one of the last local railway lines in Bohemia was built, which connected Černý Kříž, Stožec and the state frontier in Nové Údolí. This eight-kilometre track enabled connection of the South-Bohemian and the Šumava railways with the railway network in Bavaria. The number of the village inhabitants grew gradually. In 1900 there were 2733 people, while in 1930 even 2811 people (the numbers refer to the community including the attached settlements with the most populated one being České Žleby /Böhmisch Röhren/).

The turning point came after the World War II. The border zone was depopulated (displacement of the majority of people of German nationality). Only 599 people remained in Stožec and their number was further falling, mainly due to the repressive measures applied to the whole area neighbouring immediately with "West" Germany. Today the village has only about 200 permanent residents (about 120 in the village of Stožec, 60 in the settlement of České Žleby and only 9 in the settlement of Dobrá). The village nowadays belongs amongst one of the favourite tourist destinations in the Volary area.

From the village of Stožec ride to the crossroads Pod Stožcem and here turn to the right along the cycling path No. 1030. In a distance of 1,5 km from the crossroads there is a detour to Stožec Chapel and the rock. The slope is nevertheless steep and it is therefore necessary to park the bikes. Then get back to the marked path, circle round Stožec mountain and behind Dobrá continue along the blue-marked cycling path No. 1025. This will take you by the road to České Žleby and from there ride by so-called Zlatá path in direction to Stožec to the crossroads Mlaka. From here take to the left to Nové Údolí and continue along the red-marked cycling route No. 1023 towards the frontier crossing, which can be taken advantage of by those who wont the reach the peak of Třístoličník mountain. Our path mounts from Nové Údolí to the place of former Rosenauer reservoir and the beginning of the Schwarzenberg Floating Canal at the same time. Follow its artificially built bed for 9,4 km along the same cycling route up to the crossroads of Hučina. From here take the cycling route No. 1029 to Plešné Lake. From there you have to return along the same route. 900 m ahead of Hučina turn sharply to the right and continue along the cycling path No. 1023 to Nová Pec. From there you will have to mount towards the tunnel of the Schwarzenberg Floating Canal by the green-marked cycling path No. 1027. From its upper portal descent quickly but carefully along so-called Hučická road to Černý Kříž, from where only 3,5 last km remain to get to Stožec.

From the railway station in Stožec (785 m) with the tourist information point (hereinafter only TIP) set out on the yellow-marked tourist path (hereinafter only TP) alongside the railway tracks to the crossroads ahead of the grade crossing with the TIP Bonarova Road (780 m; 0,7). Our trip continues on the yellow-marked TP across the grade crossing to the crossroads with the TIP Oslí Road (crossroads) (787 m; 0,3 or 1 km), beyond the railway track to another crossroads in front of the bridge across the Světlá stream. There is a TIP U stříšky (By the Shield) /bridge/ (797 m; 3,5 km) in here. Ahead of the bridge, the road turns slightly uphill along the Světlá stream to the Schwarzenberg Floating Canal. On the left side of the Světlá river, after approximately 1,5 km, there is an interesting natural formation, so-called Giant Pot - a boulder eroded by long lasting activity of water. From the crossroads ahead of the bridge continue by the yellow-marked TP to the TP crossing and the TIP Nové Údolí (830 m; 4,5 km) and continue by the road towards the frontier crossing to the TIP Nové Údolí /railway station/ (800 m; 5 km). From here you can return to Stožec by train, if the weather is not good. Our trip goes on along the red-marked TP, crosses the railway track and crosses the Studená Vltava by the bridge. Mount by the forest path to the TIP V Podkově (887 m; 8 km), from where the right path called Dolnokrásnohorská Road leads back to Stožec. You will nevertheless continue along the red-marked TP that will take you to the former settlement of Krásná Hora (914 m; 10 km), distant about 0,5 km from the border of Bavaria. Our trip continues to the TP crossing Mlaka (906 m; 13 km), from where a frontier crossing to Bavarian Bischofsreut is accessible by the yellow-marked TP in the left direction. You will continue to the right along the yellow-marked TP copying the Golden Path past the Stone Head (973 m; 14,5 km) - a point offering beautiful view of the surrounding landscape. You will come to the historical village of České Žleby (920 m; 16,5 km) with several possibilities of refreshment. There also is an important crossing of the blue-marked and yellow-marked TP. Our trip continues along the blue-marked TP down the road past the TIP Pod Spáleništěm /game-keeper's lodge/ (856 m; 17,5 km) to the TP crossing Stožecká luka (805 m; 18,5 km). Go on along the yellow-marked TP passing through the meadows to the TIP Stožec /railway station/ (785 m; 20,5 km) where our round tour gets to its end.

Track of medium difficulty – Stožec past České Žleby and back

Stožec (by the Municipal Office) – across the meadows in direction of Nové Údolí – along the border across the Studená Vltava and along the Mechový stream – Krásná Hora, Mlaka (frontier crossing to German Bischofreut) – Kamenná Hlava (Stone Head) in direction of České Žleby – past the ski slope in České Žleby – by Lenorská road through the forest to the crossing Below the Stožec rock – Stožec meadows and back to Sožec

Stožec is sought by tourists mainly thanks to its position amidst forests, offering endless walks or rides on bikes on the perfectly maintained tourist paths. Besides that, it is possible to take advantage of so called Vltava Path, first copying the stream of the Studená Vltava and from the village of Smolná Pec the stream of the Vltava, till its confluence with the Teplá Vltava in Nová Pec, which is situated at the beginning of the "Czech Sea" - the Lipno water reservoir. With its 16 km it is the longest in-line skating path in Bohemia.
The fans of romantic bathing in the nature and of water games may do so at the weir in the Studená Vltava right in the village. The weir was built here to retain and conduct waters to the local water power plant. 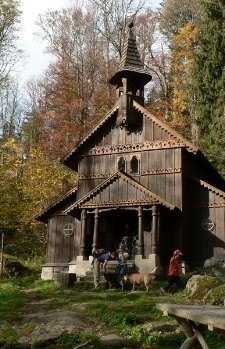 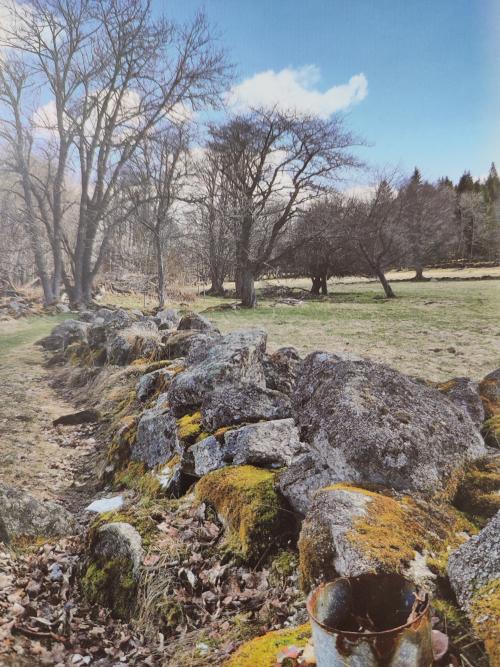